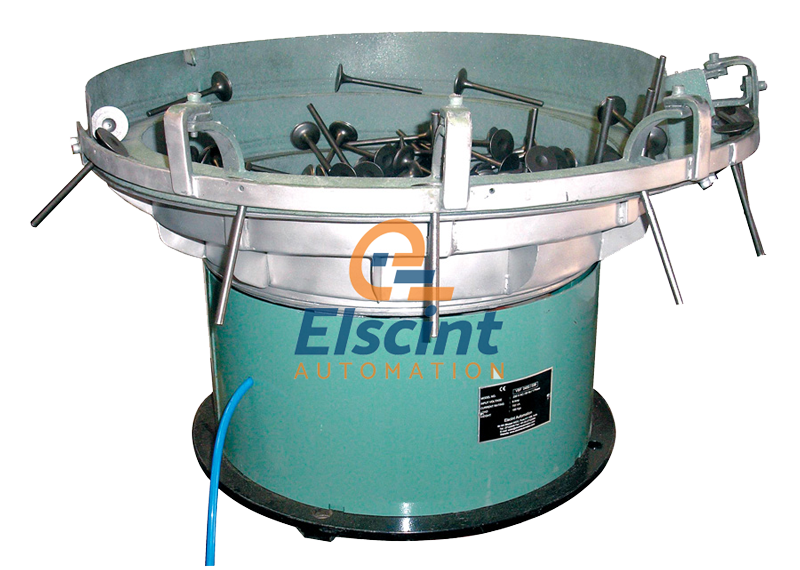 Elscint recently manufactured and supplied a Vibratory bowl feeder for feeding of Engine Valves having head diameter from dia 35 mm to dia 48 mm with length varying between 60 mm to 90 mm in head down orientation. The tendency of the engine valves is to come up in axial orientation, either head forward or behind. Making them in head up orientation is easy as a single slot in the wall makes them head up. Making them head down requires a different type of orientation tooling which Elscint provided in this bowl feeder. The tooling was made so versatile that all the above sizes could be accommodated without any changeover. This resulted in ease for the operator when sizes are changed. Additionally, Elscint provided a stand to mount the equipment. The bowl was coated with a double layered coating, namely ElscinthanePU, which has a thickness of upto 5 mm to ensure longer life as the valves have sharp edges, which results in usual coating wearing off in less than 3 months. The vibrator being big and due to the large metal parts, the noise level was in the range of 80 DB. Hence, Elscint recommended and supplied a noise enclosure made of mild steel, lined with acoustic foam. This reduced the noise level to just 70 DB. The noise enclosure had a top polycarbonate cover with a level controller which activated a tower lamp in case the level of engine valves in the bowl feeder went down, alerting the operator. The whole equipment was mounted on a stand with a (+/-) 100 mm ht. adjustment. The equipment was supplied to a machine builder who had an order for the same from a Latin American customer. Hence, the requirement was that the vibratory bowl feeder should work on 220 V/ 50 Hz as well as 110 V/ 60 Hz supply. Elscint provided special coils for the vibrator which made this possible.

Monish Shete is CEO of Elscint India Pvt Ltd (formerly Elscint Automation), a 40 year old company manufacturing vibratory bowl feeders, Rotary / Centrifugal Feeding Systems and similar small part handing products. He personally has more than 25 years experience with last 20 years being with Elscint. This blog will help customers and laymen understand the intricacies of vibratory bowl feeders. One can find information about the finer aspects of vibratory bowl feeders which cannot be found anywhere else. Case studies and information about various innovative ways of feeding and orienting of different parts are given in this blog. Do subscribe to get this thrice a month.

We are glad that you preferred to contact us. Please fill our short form and one of our friendly team members will contact you back.